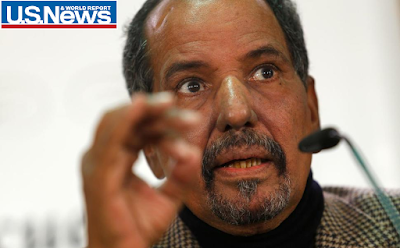 After 40 years of fighting Morocco, Mohamed Abdelaziz reportedly had second thoughts on his deathbed. On his deathbed, the head of a major West African separatist group stunned doctors and colleagues by repudiating his nearly half-century alliance with Algeria, according to a Madrid-based news site.

Mohamed Abdelaziz, whose Polisario Front has opposed the Moroccan presence in the Sahara since the 1970s, died Tuesday of lung cancer at the Mayo Clinic in Rochester, Minnesota. Abdelaziz, president of the Polisario, had been a daily smoker for most of his life.

Before he died, Abdelaziz confided to close associates that he had realized his own beliefs had become "obsolete" and the long-simmering conflict in the region was pointless, according to the Spanish-language news site lainformacion.com.

The dying leader also regretted his alliance with Algeria and felt guilty over the conflict, according to the site. Algeria sheltered and supported the rebel Polisario Front for decades as part of a proxy war against the neighboring kingdom of Morocco. Abdelaziz's regrets, are a stunning turnaround for the movement and its supporters.

In a spokesman's statement on Tuesday, U.N. Secretary-General Ban Ki-moon offered "condolences to Mr. Abdelaziz's family and to the Frente Polisario as they mourn his untimely loss."

Abdelaziz spent most of his life in the Sahrawi refugee camps near Tindouf, Algeria – a collection of concrete and mud-brick huts scattered among the stony outcroppings in the Sahara Desert – alongside the thousands of Sahrawi refugees he represented. He ruled over some 100,000 followers in a one-party state that barred alternative political parties.

Algeria provided weapons, tanks, food, passports and millions of dollars to the Polisario Front over the last four decades. Earlier this year, Abdelaziz received a written note from Algerian President Abdelaziz Bouteflika on the 40th anniversary of the proclamation of the SADR.

"Algeria will spare no effort to provide support to the U.N. secretary-general's proposal to revive direct negotiations between Morocco and the Polisario," Bouteflika wrote.

Abdelaziz was reportedly born in Marrakesh, Morocco, though some Sahrawi tribal leaders maintain that he was born in 1948 in Smara, a village deep in arid Western Sahara lands

The separatist leader had family ties to Morocco. Abdelaziz's father, Khalili Ben Mohamed Al-Bachir Rguibi, was a member of the Royal Moroccan Army and active in the Royal Advisory Council for Saharan Affairs.

The Polisario Front has ordered a 40-day mourning period, after which the group will choose a new secretary-general in an election that is expected to have a single candidate.